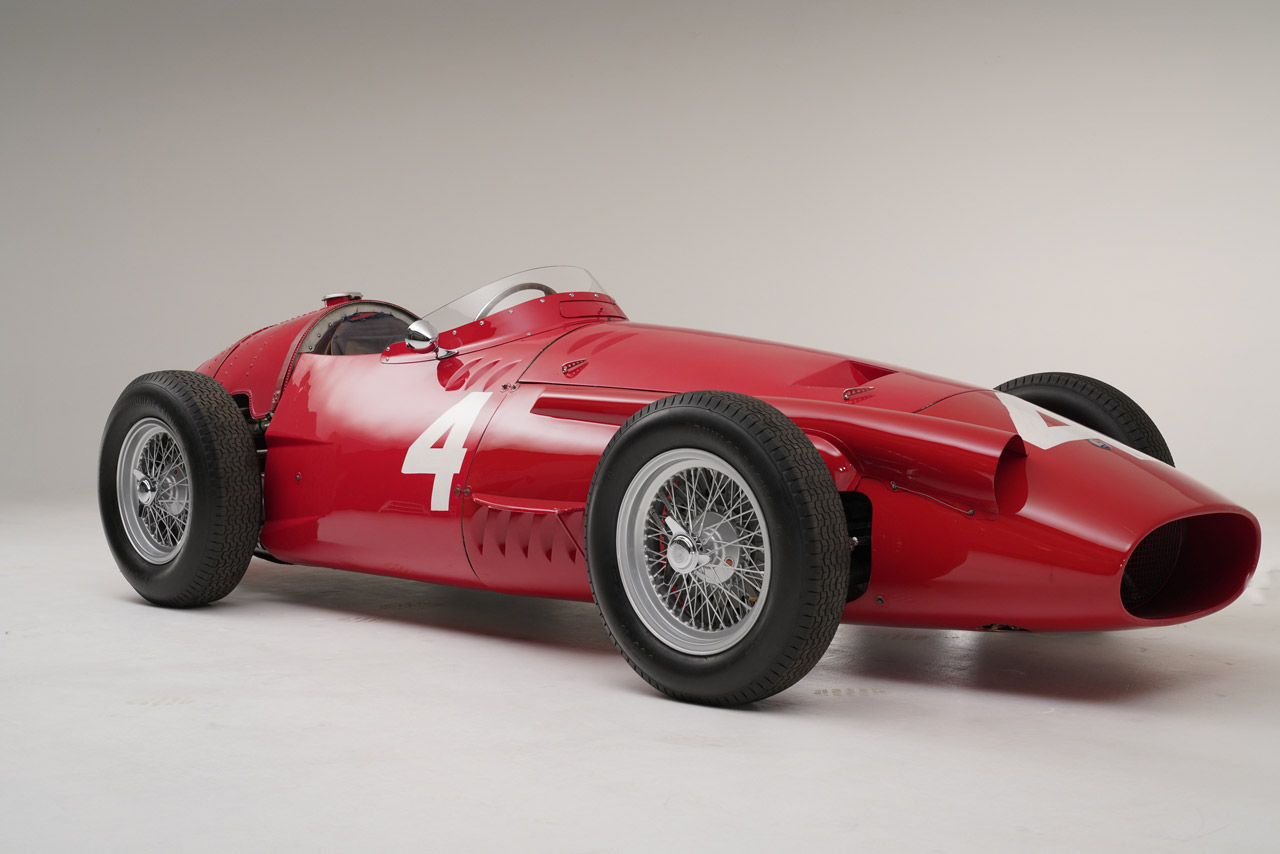 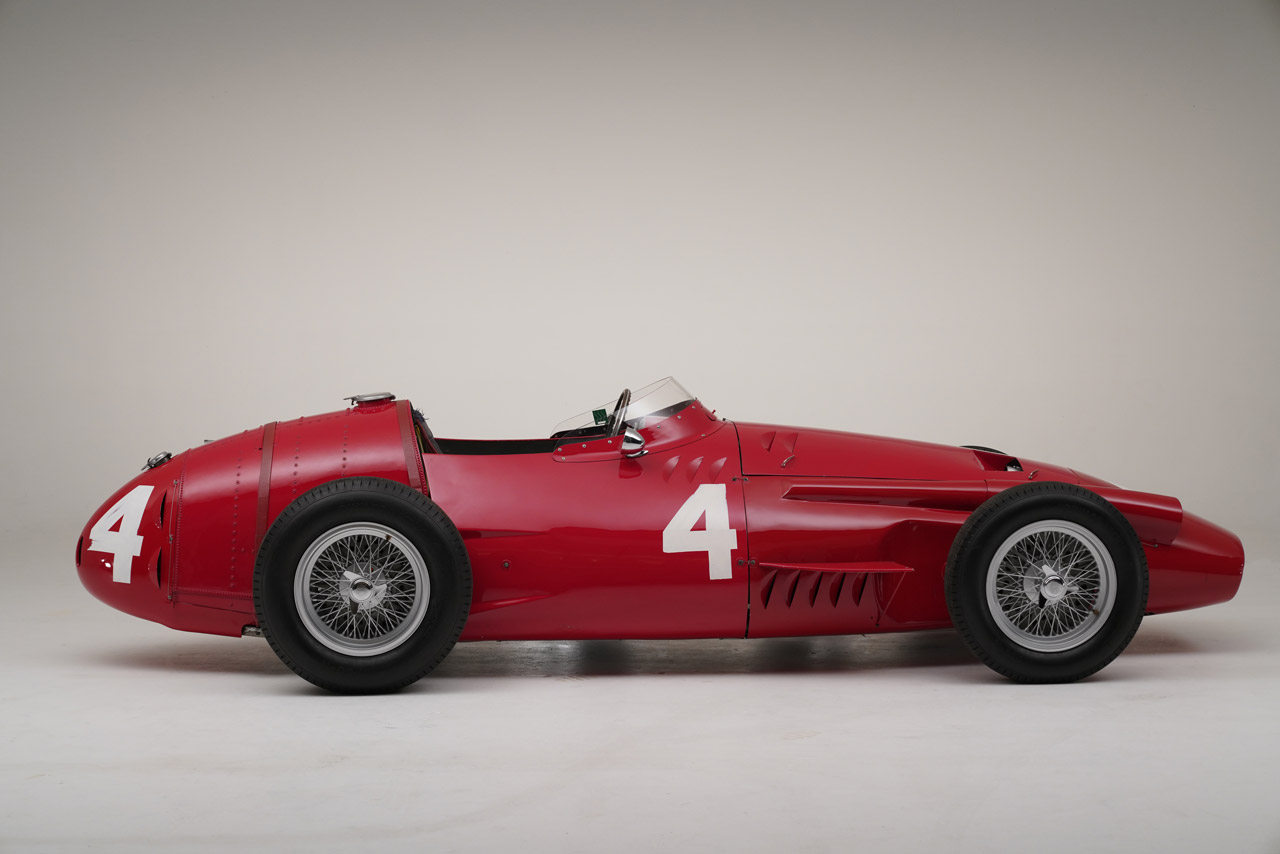 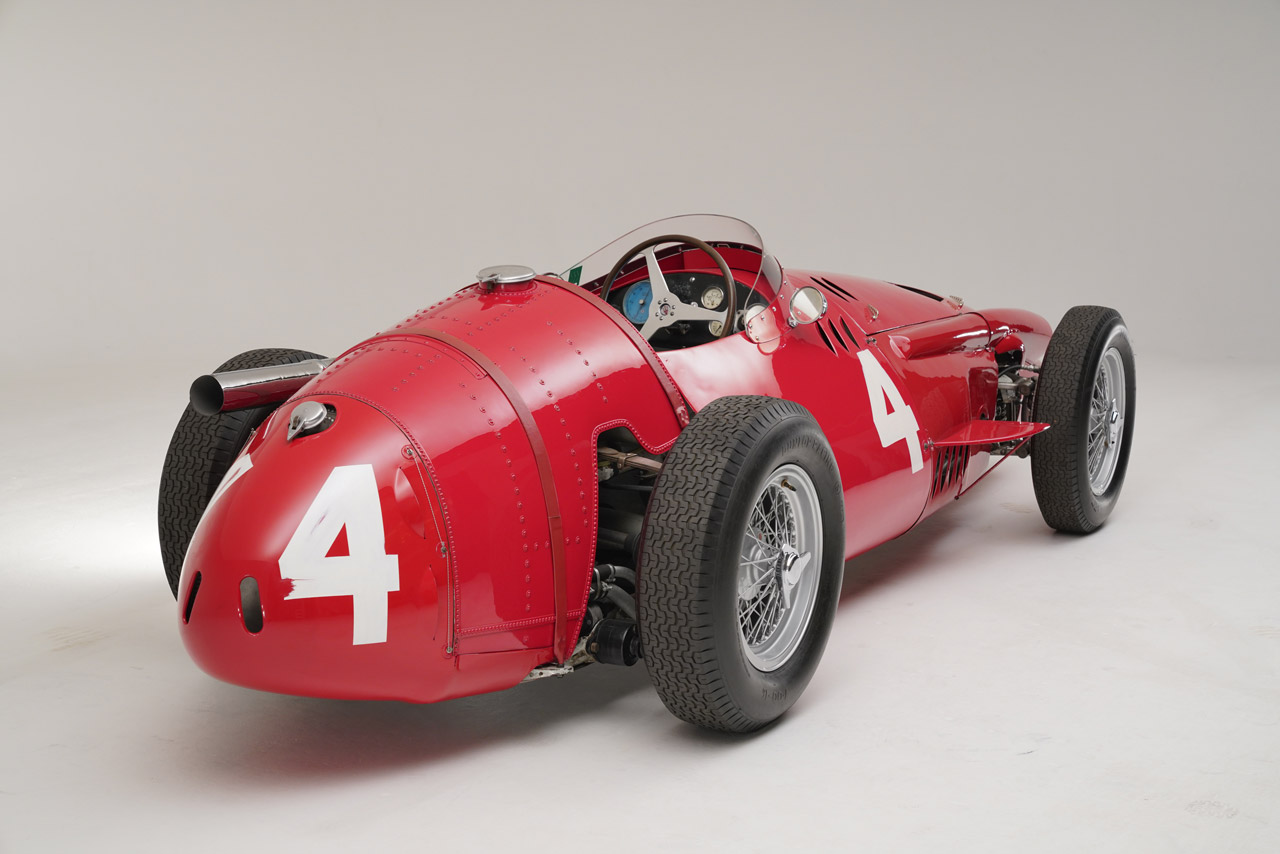 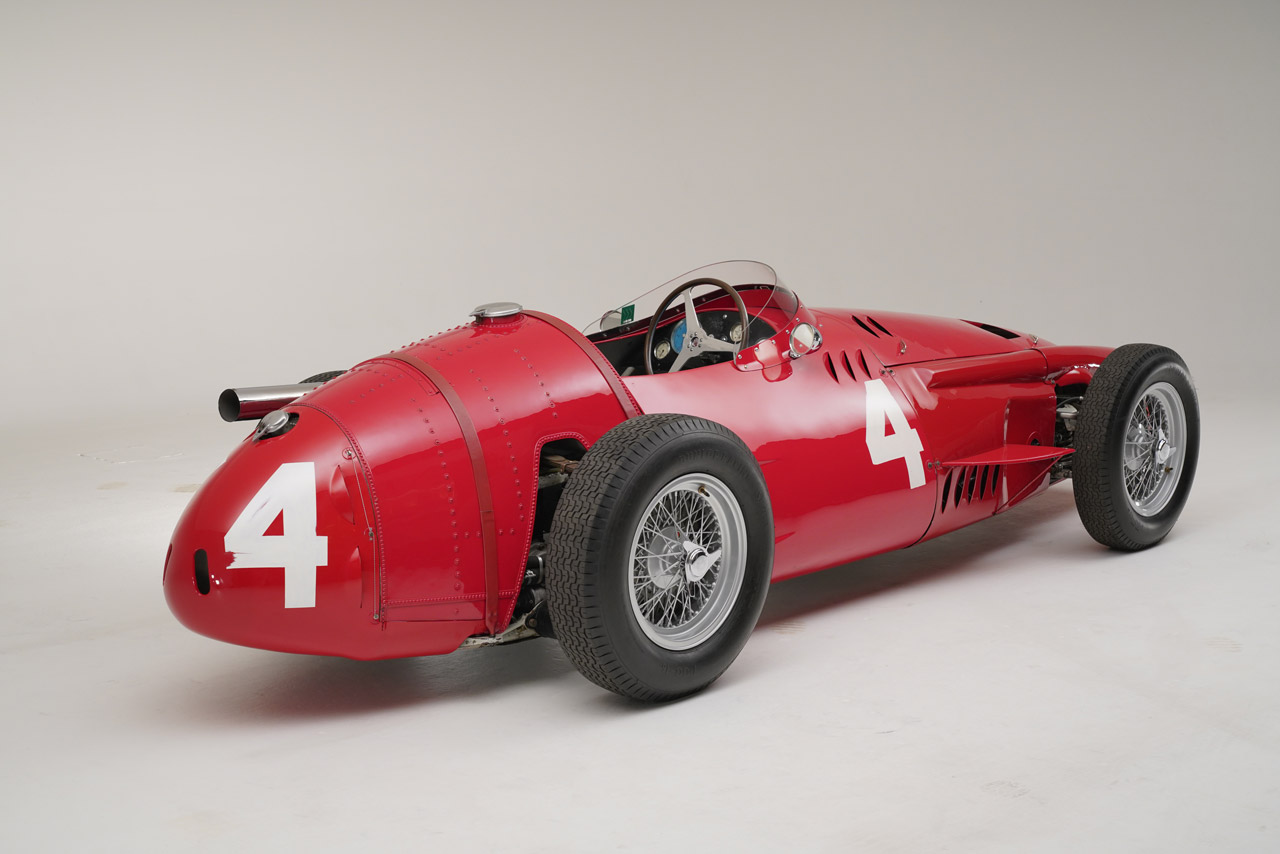 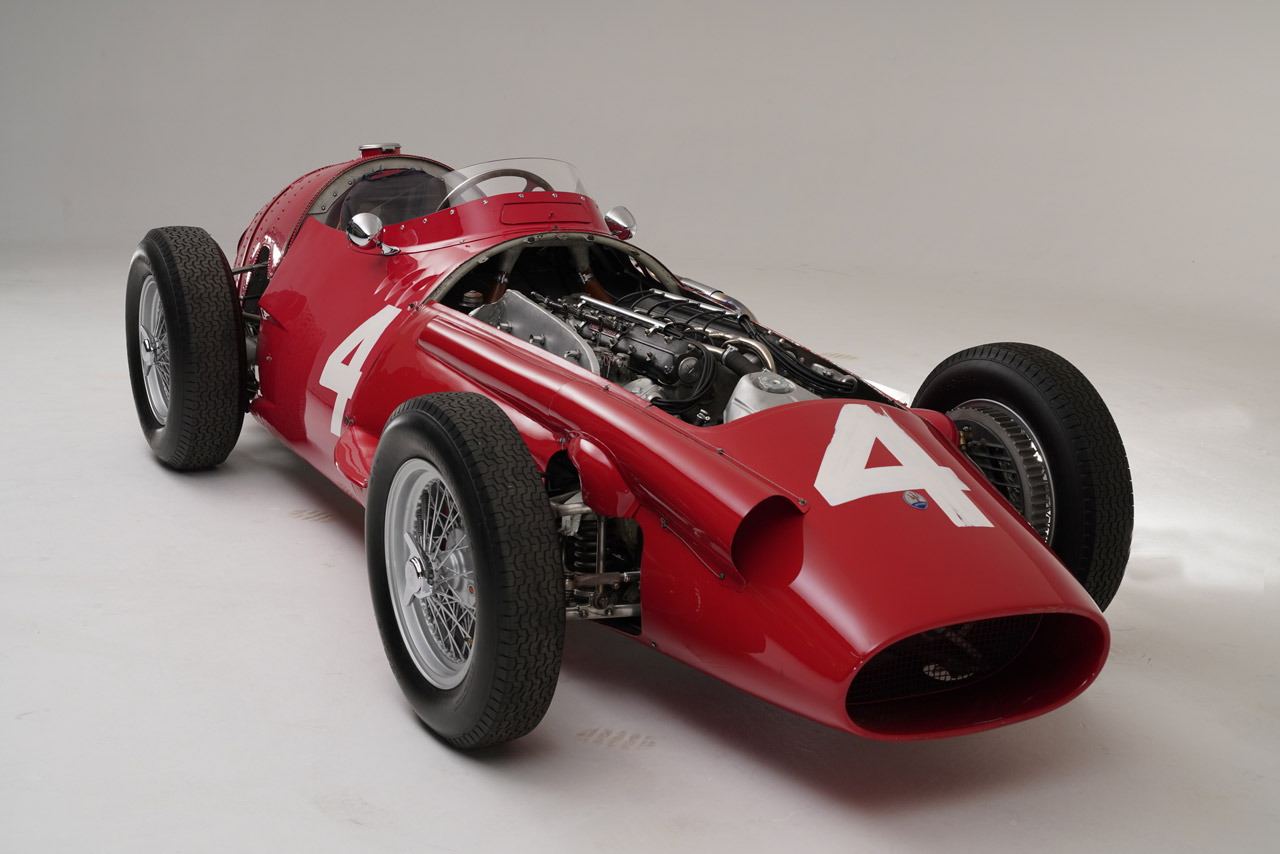 “In my opinion, the greatest racing car ever is the Maserati 250F. It is completely user friendly and forgiving and I really enjoyed racing the Maserati first as a privateer and then as a semi works driver”.

We are proud to offer this Maserati 250F ex factory works car with an amazing history. The list of the pilots reads like the Who is Who in Racing of the 1950’s. Drivers like (in alphabetical order) Jean Behra, Peter Collins, Hans Herrmann, Roberto Mieres, Stirling Moss. Luigi Musso, Carroll Shelby, Maurice Trintignant and Luigi Villoresi are amongst those who did pilot this car, many of them as factory team drivers.

What makes this Maserati factory team race car set apart from other 250F is the amazing provenance and originality. The car was sold to a private race team after it’s 1955 season as a factory team but continued to be maintained by the factory until the end of the 1959 Grand Prix season finishing 15th in it’s last race at the GP of Monza. Our 250F continued to be stored and maintained at the Maserati factory after it retired until British collector Tom Wheatcroft purchased the car in 1964 through the introduction by the factory from Earl Ottorino Volonteri. It became part of the Donington Grand Prix Collection Museum. It stayed in the Donington Grand Prix Museum for 44 years until it was purchased by an American collector to become part of his Hundred plus car private museum. Never having been involved in any major accidents it is considered to be the most original 250F in existence. It has been thoroughly mechanically refinished by California based Maserati expert Nino Epefani and is in race ready condition.

Most amazing is the quantity of original documents accompanying the car including correspondence between Tom Wheatcroft and the Maserati factory.

A wonderful addition to any race car collection and eligible for some of the best historic race track events including the prestigious Monaco Historic Grand Prix.

Following its creation in 1950, the World Championship for drivers saw an intense battle between manufacturers Alfa Romeo, Talbot Lago and Ferrari among others. Maserati yearned to return to the top echelon and the new 2.5 liter Formula for 1954 in addition to the pull-out of Alfa Romeo would provide that opportunity.

The Maserati factory team was able to entice Ferrari’s chief designer Gioacchino Colombo along with engineer Valerio Colotti who would be responsible for the chassis, suspension and transmission of a new car. The Maserati 250F was born.

The 250F raced in the 2.5 liter Formula One circuit between January 1954 and November 1960. The 250F first raced in the 1954 Argentine Grand Prix driven to the victory line by the legendary Juan Manuel Fangio. British ace Stirling Moss raced his own privately owned Maserati 250F for the full 1954 season. In 1956 Moss won both the Monaco and the Italian Grand Prix with a 250F works car. In 1955 Stirling Moss won in our car, chassis 2515, as a Maserati factory team driver the Internationbal Gold Cup at Oulton Park.

Stirling Moss later said that the 250F was the best front-engined F1 car he ever drove.

The car featured a twin plug, 220 bhp, 2.5 Maserati A6 straight-six engine, ribbed 13.4’ drum brakes, wishbone independent front suspension and a De Dion tube axle. The aluminum bodywork was both functional and elegant with the fuel tank forming the tail of the car and having a capacity of 200 liters.

The cockpit was quite generous and offered an upright seating position with plenty of elbow room but the dash was too close for the straight-armed driving style favored by many of the newer drivers.

The transmission offered four forward gears plus reverse while drum brakes were used for stopping the car with the 13.4″ diameter drums mounted outboard front and rear.

Further changes for the works cars were applied during the 1955 season and included a more appropriate 5-speed gearbox, wider steel drums and large bore exhaust system.

Hamann Classic Cars currently has for sale one of the finest Maserati race cars ever built. This 250F is in excellent condition and a true collector’s piece.