Posted at 11:40h in Tour by
On Saturday morning we all met at the Parking structure where we had left our cars over night on Friday afternoon.

After having received the road book for this short Tour the cars slowly left for the Tour from Maranello to Modena and back. It started with a parade along the Ferrari factory through Maranello and then back past the factory on the country roads to Modena. It was an impressive sight seeing all of these mostly classic Ferrari parading in both directions along the well known entrance of the old part of the factory. Escorted by Police on motorcycles we headed towards Modena. The speed on the country roads was moderate and I hardly shifted into 4th gear. There was really no need for the road book as we just followed each other with a rewarding view in the rearview mirror of the various Ferrari lined up behind. 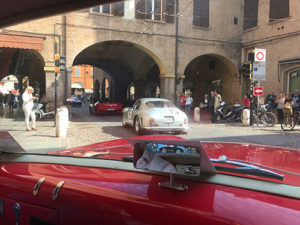 Once we drove into Modena we realized that entering Modena on a Saturday around noon time was not such a great idea. It seemed that many Modenese from Modena and surrounding towns went into town to do their weekend shopping, visit the market or wherever it might have taken us. Traffic was heavy and the Police unable to keep the Ferrari all together as regular cars sneaked in between. The further we came into the city center the worse traffic became and water temperatures climbing towards the boiling point. As I was watching my temperature gauge I saw the first older Ferrari already parked on the side of the city streets with steam coming from their hoods. The Tour took us by Casa Ferrari in Modena, another Ferrari themed Museum where Enzo Ferrari started his career as engineer and team chief of Scuderi Ferrari, the inofficial Alfa Romeo team after Alfa Romeo retired their factory race team in the early 1930s. My co-pilot Marco Makaus, former general manager of the famous Mille Miglia, alerted me about the rising temperature and suggested that I would park the car on the side to let it cool down. I thought that we would hit open roads once through the Museum grounds and that wind would cool the car down. How mistaken I was… We hit stop and go traffic again and our radiator started steaming leaving us stranded . But we were not alone, behind us within less than 200 meters two California Spyder suffered from the same problem. Marco went to a close by coffee shop and returned with several waters of mineral water – Aqua Naturale which we poured into the radiator after the car had cooled down a little allowing us to open the radiator cap. We managed to make our way to the Military Academy at Plaza Ducale, the historic center of Modena, without overheating again with my copilot’s intimate knowledge of Modena rather than following the Road book. Marco used to work for many years in the Marketing department of Ferrari and his knowledge of local roads came very handy. We were treated with a fabulous lunch on this old Military Academy, a location usually not accessible to tourists. Having lunch in Italy of course included a Prosecco as Aperitivo followed by wine during lunch. It is Italy and only a few, mostly American participants, were wondering if this would be legal with us all driving our Ferrari back to Maranello. For me, it was definitely very much appreciated as it helped me calming my nerves from the stress ride through Modena’s city center. Once we finished lunch everybody got to their cars which were parked on Piazza Ducale in front of the academy. I once again ignored the route of the Road book but drove straight back to Maranello following Marco’s instructions as we had no intention to struggle with an overheating radiator again. 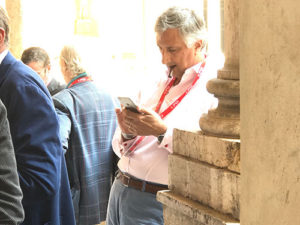 We therefore were practically the first car to arrive at Ferrari’s Fiorano test track where the Concorso d’Eleganza was going to be held the next day.