Bella Macchine in Toscana: A time out with three icons 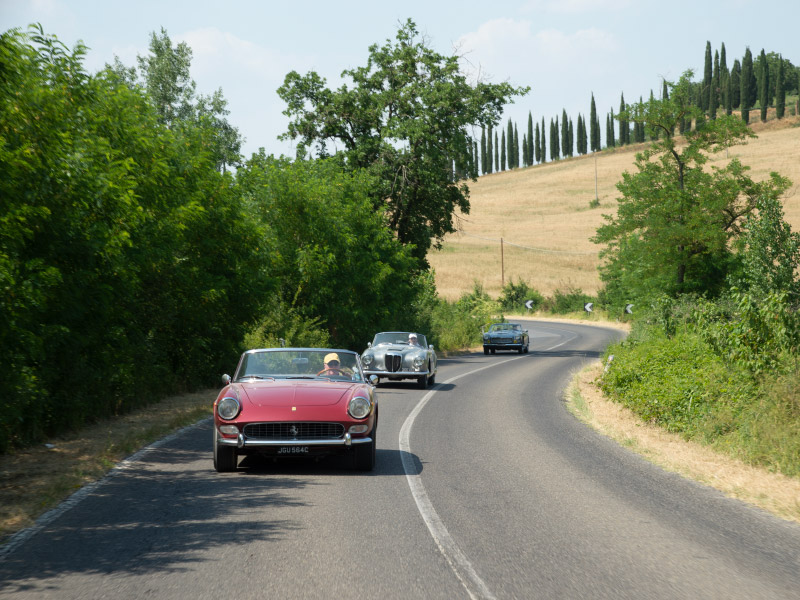 10 Aug Bella Macchine in Toscana: A time out with three icons

Posted at 01:40h in Tour by Jörg Lichtenberg

Ah, the beautiful Tuscany! Few Italian regions are as popular as Tuscany, located in central Italy, with famous cities like Florence, Livorno, Pisa or Siena. It is home to some of the most famous Renaissance art and buildings in the world, such as Michelangelo’s famous statue of David, Botticelli’s works in the Uffizi Gallery and Florence Cathedral. Tuscany also has a lot to offer in terms of scenery. For example, the diverse natural landscape stretches from the rugged Apennines to the beaches of the island of Elba on the Tyrrhenian Sea to the olive groves and vineyards of the Chianti region. Tuscany is always worth a trip and provides the perfect backdrop for a variety of excursions.

When you get the opportunity to create one here, you shouldn’t hesitate. And so it happened that the author of this text was ranting about one of his favorite icons over a leisurely lunch with Thomas Hamann, a renowned dealer of special classic sports and racing cars: the Maserati 3500 GT Vignale Spyder. When I got carried away saying that no other convertible from that era could hold a candle to the Maserati in terms of elegance and culture, Hamann had to disagree. The Maserati was a great car, he conceded, but he did not want to let my statement stand in its unconditionality. The resulting (not entirely serious) argument was to have consequences. A few days later, Hamann called and invited me to a trip to Italy. On behalf of a customer, he was currently offering for sale the Maserati I held in such high esteem (see www.hamannclassiccars.com). The vehicle was ready in Tuscany and could be compared once, in the context of a drive, with two other open Italian sports cars of its time. Needless to say, I accepted and a few days later we landed at the airport “Amerigo Vespucci” in Florence. 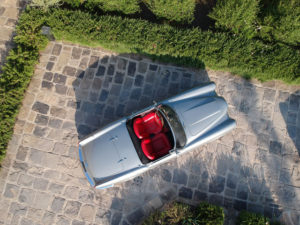 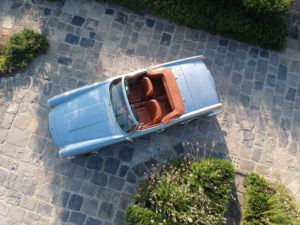 A little later, the owner of the Maserati was waiting for us at his villa near Buonconvento in the Siena region. Two other vehicles were also waiting for us, but Hamann remained silent about them until the very end. Shortly before arriving at the picturesque Tuscan estate, the excitement and anticipation grew immeasurably. And finally the secret was revealed as we drove down the long driveway to the villa. Freshly washed, three breathtakingly beautiful vehicles stood here ready to be driven out: the announced Maserati 3500 GT Vignale Spyder, a Lancia B24S Cabriolet and a Ferrari 275 GTS. Bella macchine! Three icons that share similar DNA but could hardly be more different. All three open-top sports cars present themselves in the finest Italian threads, are well motorized and are milestones of Italian driving culture. They stand for “Dolce Vita” and the exclusive lifestyle of the great Hollywood legends of the 1950s and 1960s. The Ferrari caught my eye first and foremost. Just saying the brand name makes petrolheads’ eyes water. Every child dreams of being allowed to drive a Ferrari once in their life, and so the little boy in me got goose bumps with anticipation at the mere sight of it. 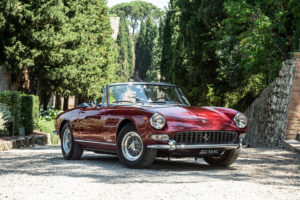 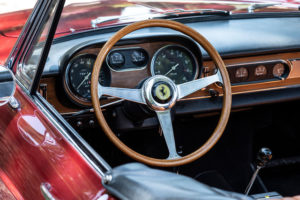 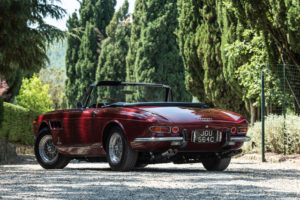 After a friendly welcome and initial inspection of the vehicles, we were off. We agreed to divide the trip into three stages around Montalcino. Between each stage we would exchange the vehicles, so that everyone could make his own picture of each vehicle. I was allowed to complete my first stage in the Maserati 3500 GT Vignale Spyder. I started the engine and the powerful six-cylinder greeted me with a friendly snarl. Immediately, the hairs on the back of my neck stood up. I grasped the slim gearshift lever, engaged first gear and smoothly drove off. Very refined and elegant with a rich sound: exactly how I had imagined it. After a few kilometers we left the bumpy side road behind us and turned onto the paved main road. The owner of the cars drove ahead in the Ferrari and immediately stepped on the gas hard. I did the same and the Maserati made a good leap forward. The basis of the car is a luxurious Grandturismo, which was first presented to the public in Geneva in 1957. The order to produce a convertible went to the Carrozzeria Vignale under the responsibility of the legendary automotive designer Giovanni Michelotti, who designed an independent body, the prototype of which was presented in March 1959 and went into series production just one year later. The Maserati was powered by an in-line six-cylinder engine with two overhead camshafts and three twin carburetors, producing around 240 hp from 3.5 liters of displacement and enabling a top speed of 230 km/h. Only very brave drivers were likely to achieve this. Only very brave drivers are likely to have exhausted this. But the Maserati certainly doesn’t lack power – yet it’s more of a cruiser than a racer. 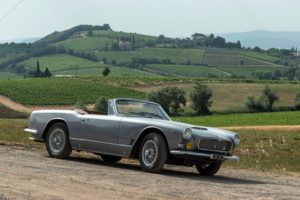 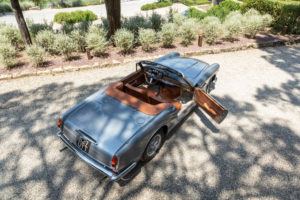 In the middle of the old core of the picturesque town of Montalcino, we swapped vehicles. It was now to continue for me in the Ferrari 275 GTS. The V12 engine started with a rich and powerful roar. The acoustics, when the three Weber twin carburetors gobbled up the intake air, seemed so confident, as if the Ferrari knew no competition at all. A real joy was the open shift gate and the slam of metal on metal when changing gears. And indeed: even if the Maserati is hardly inferior to the Ferrari in terms of displacement and horsepower, the double number of cylinders cannot be argued away. The Ferrari was the top dog today. What it may lack in elegance, it makes up for in performance. A pure, loud and fast driving machine that was endless fun. The Spider was presented to the public along with the 275 GTB at the Paris Motor Show in October 1964. The design was reminiscent of the Berlinetta, with the 275 GTS having softer, more conservative styling. The powerplant was the same as that of the 275 GTB: a V12 engine with an overhead camshaft and 3.2 liters of displacement that would put 260 hp on the road. In short: stunning car design, 12 cylinders, decent power and a black rearing horse on a yellow background on the hood. So what more could you want? 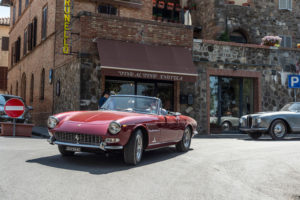 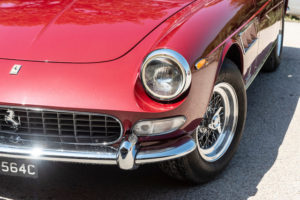 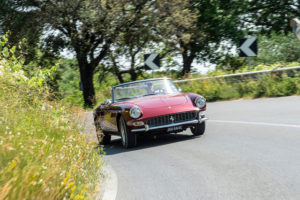 Almost reluctantly, I exchanged the Ferrari at the next stop for the Lancia, which seemed dainty in comparison. But what now offered itself to me became the large surprise of the day: the Lancia should turn out as the most cultured of the three ripe Italian gentlemen. I took place behind the fine-limbed steering wheel and pressed the key for starting into the ignition lock. The engine immediately kicked into gear with a sporty soundtrack. The gears followed the usual H pattern and were easy to engage, while the pedals hardly required any muscle effort. Twelve years before the Ferrari, Lancia presented a two-seater roadster as a Spyder on the platform of its Aurelia at the 1954 motor show in Brussels. This body was also designed by Pininfarina. On the engineering side, it drew on the advanced Aurelia sedan with its V6 engine and transmission on the rear axle (transaxle). But despite the outstanding design and modern technology, sales were comparatively slow. In addition to its very high price, the inconvenient, non-rainproof soft top as well as the side-mounted windows and a stiff door-opening cable were probably the main reasons for the car’s moderate success. Only one year later, the Spyder was finally replaced by the B24S Cabriolet, which, as far as the body was concerned, was an almost completely new car. Hardly a sheet metal part could be carried over from its predecessor. The folding top was now sturdy and (relatively) tight, there was a conventional windshield with front pop-out and side crank windows, interior door handles and a completely redesigned dashboard. There were also some exterior changes such as much deeper door cutouts and continuous bumpers. Even though the car became heavier and the power dropped from 118 to 110 hp, the changes obviously brought the desired success. At any rate, 521 units of the convertible were sold. At first sight the Lancia seemed to have against the concentrated power of a 12-cylinder Ferraris no chance – in the end it will be however this vehicle, which surprised and impressed me most. Without question the Lancia could be moved most relaxed and could keep up thereby also with sporty passages with Maserati and Ferrari problem-free. 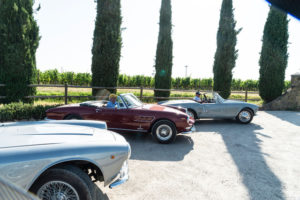 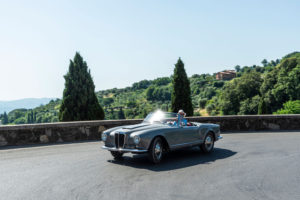 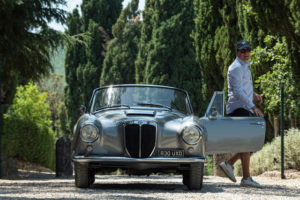 We had chosen one of the hottest days of the summer for our trip and, in addition to long country roads, had repeatedly opted for bumpy, dusty side roads. That we would have spared the vehicles, one can therefore truly not claim. Nevertheless, all three of us mastered the sporty outing with flying colors. After an extensive car wash we said goodbye to an unforgettable and gasoline-rich day with a bottle of wine and excellent steaks in the Ristorante Campo Del Drago of Castiglion del Bosco. And as the sun slowly retreated behind the rolling hills, I had to agree with Hamann: the Maserati is still an absolutely wonderful car, but after today’s outing, it had some serious competition for me. 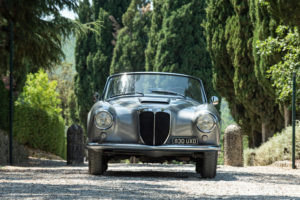 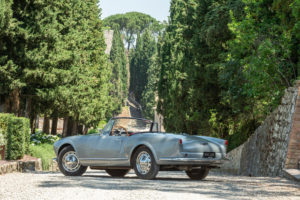 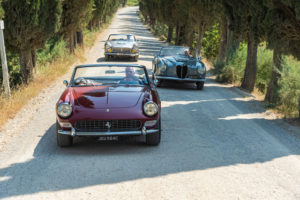 Published in the “FUELISH Time Out” category in OCTANE Magazine, Issue #36, October 2019: click here for the PDF of the article (german language version).