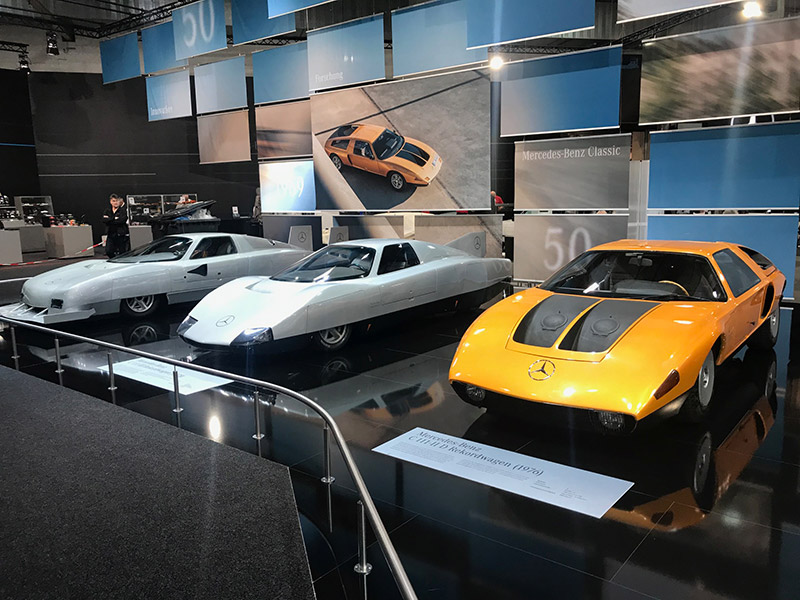 Posted at 18:36h in Exhibition by
Europe has something in the classic and collector car world, which the United States is lacking – classic car trade shows and fairs. They can be found in most Western European countries but a few events are standing out from the rest of them. Amongst these events the Techno Classics in Germany’s city of Essen is by far the largest of these vents. Taking place beginning of April of each year it attracts collectors, hobbyists and collectors from all over Europe with the occasional American finding his or her way to Essen. I keep complaining about the confusing layout of the halls since I am coming here. I guess it takes several years of attending to find your way. This year I was surprisingly able to navigate myself through the fair grounds without too much confusion.

You find almost everything around the classic car hobby. Manufacturers are displaying vintage and classic automobiles as well as some of their latest production line. Classic car dealers are bringing a variety of their stock. Private people are able to offer their cars in open air spaces between the halls. Parts, accessories, tools and shop equipment are being offered next to model cars, books, automotive artwork and photography. Various Clubs have also their stands as do several Concours and race events. Name it, you find it in Essen. 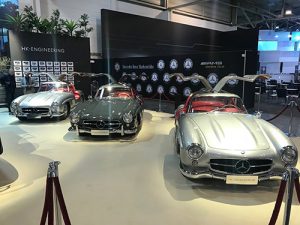 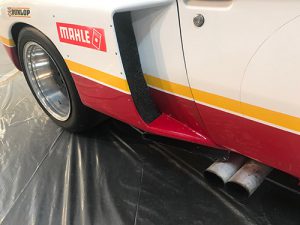 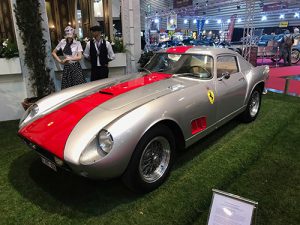 As with all such events the Techno Classica proves itself to be heavily loaded with automobiles from Mercedes-Benz and Porsche. I had my share for the next months of seeing Porsche 911 and Mercedes Pagoda SL models. Hall 1 is dominated by Mercedes-Benz, which put on a fantastic display every year. The most amazing site was the 300SL Gullwing barnfind the Mercedes-Benz Classic Center in California had purchased out of long term ownership in Florida. It was first shown at the Amelia Island Concours d’Elegance in March of this year. Now you could find it on a podium with glossy surface showing the reflections of the car. What a sight. Mercedes-Benz dealers, which are considered to be partners of Mercedes-Benz Classic, were showing fabulously restored examples with the Star on the hood. They were in most cases not only fabulously restored but had also fabulous price tags. I often wonder if anyone is willing to pay these prices. 250,000 Euro for a 280SL Pagoda seems equally high to me as almost 500,000 Euro for a 280SE 3.5 Cabriolet. But you find other dealers and restorers in Hall 1. Most amazing is the selection Axel Schütte bought this year showing also other makes than Mercedes Benz. A wonderful BMW 507 was on his stand as was a Ferrari 275 GTB. Hans Kleissl of HK Engineering who is specialized in 300SL models brought a few beautiful examples.

Hall 3 had as usual the Ferrari and Maserati Owners Clubs displaying some cars as well as German Ferrari dealer Eberlein having a stand showing a few Ferrari, nothing spectacular though. My favorite stand in Hall 3 and among all of the exhibitors at the Techno Classica was Felipe Garcia’s Mint Classics. The Columbian native who is living in Munich is specialized in BMW only and he brought an impressive collection of various 3.0CS including a CSL Batmobile a race car. I liked the 2002 Turbo, a car I was dreaming of to call my own in my high school days in my hometown Wiesbaden. 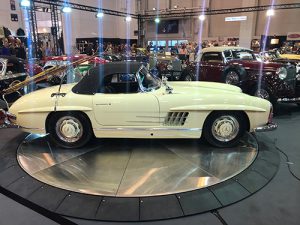 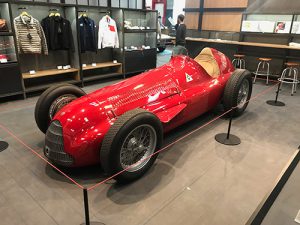 This year Hall 5, always the center of the Techno Classica, has been totally refurbished. In the center is a building resembling a historic town hall where the organizers are displaying each year cars, which will be judged in the Techno Classica Concours. Due to the limited space it must not be compared to your usual Concours d’Elegance. On display were sports racing cars from the 50s and 60s including the Porsche 550RS Spyder owned by State-of-Art Porsche Collection, a Jaguar C-Type, Ferrari 250GT TdF, Ferrari 250SWB Berlinetta Competizione as well as other cars.

As in all the other Halls I found a large variety of dealers from Germany, Belgium, Holland, France, Italy and the UK. Mark Hyman was the only American exhibitor. 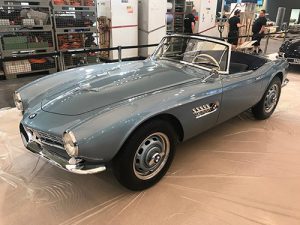 As usual I did visit my Friend Eberhard Thiesen’s stand in Hall 8 who brought as usual a wide variety of classic cars but seemed to be a little light in inventory compared to previous years. This was actual beneficial as the space was not too cramped allowing generous access to the displayed cars. Something I wish other exhibitors would have done. I was often shaking my head about how tight some exhibitors put and close to each other some exhibitors presented their cars making it impossible to take a closer look.

This year the English auction house COYS which has been holding an auction for the last 10 years felt the wind blowing in their face a RM Sotheby’s was holding an auction in the lower level (basement) of Hall 1, in 1A. The selection of lots was very unusual for RM Sotheby’s who usually offer selected classic cars in the medium and high market segment. This auction had Hundreds of cars which you often expect to see more of on used car lots than at an RM Sotheby’s auction. For sale was a large Youngtimer collection, mostly cars from the 80’s and 90’s. Such cars were already offered at the RM Sotheby’s auction in Paris during Retromobile where they achieved mind blowing world record prices most people couldn’t believe. In this auction prices were more moderate. Worth to mention though were the prices for a number of Lancia, here especially the Stratos (one of my favorites), the 037 Rally Stradale and the Lancia Delta S4 Stradale, which sold for above one Million Euro. 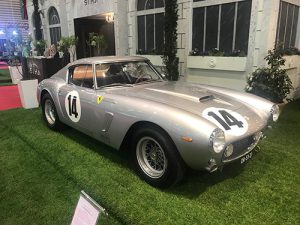 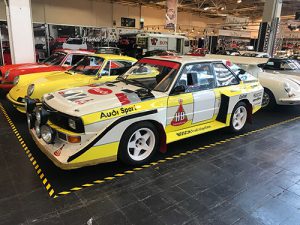 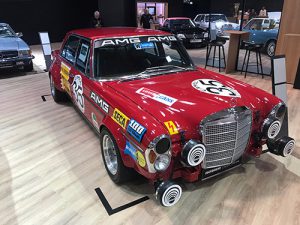 At the end of the day I was happy to have a drink at the Bar of the Atlantic Hotel where many exhibitors and visitors stay and meet after the show. It was a well deserved refreshment as I walked about five miles each day. My French friend Laurent Auxietre walked more than eight miles on Wednesday but he started a few hours before me.

I will be back next year as it is always good to meet friends, clients and fellow dealers and brokers and exchange stories.

This website uses cookies to improve your experience while you navigate through the website. Out of these, the cookies that are categorized as necessary are stored on your browser as they are essential for the working of basic functionalities of the website. We also use third-party cookies that help us analyze and understand how you use this website. These cookies will be stored in your browser only with your consent. You also have the option to opt-out of these cookies. But opting out of some of these cookies may affect your browsing experience.
Necessary Sempre abilitato
Necessary cookies are absolutely essential for the website to function properly. This category only includes cookies that ensures basic functionalities and security features of the website. These cookies do not store any personal information.
Non-necessary
Any cookies that may not be particularly necessary for the website to function and is used specifically to collect user personal data via analytics, ads, other embedded contents are termed as non-necessary cookies. It is mandatory to procure user consent prior to running these cookies on your website.
ACCETTA E SALVA